Wind energy saved 15.7 billion euros to the electricity system in four years and 227 euros to each average consumer 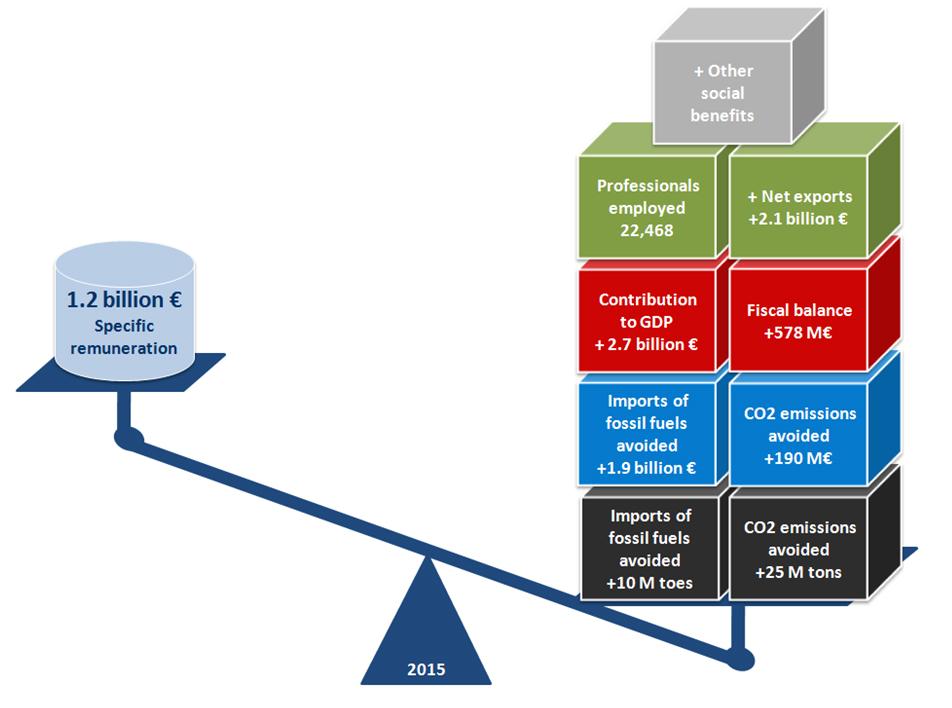 The report of the consultancy firm Deloitte shows how the sector has been hit by the Energy Reform and how it has managed to remain afloat despite the difficulties, with the consequent benefit to the Spanish economy.

Madrid, 24th October 2016. The report of the consultancy firm Deloitte for the Spanish Wind Energy Association (AEE), Wind Energy in the Spanish Economy 2012-2015, shows the extent to which the sector has been hit by the Energy Reform and the way how has managed to remain afloat despite the difficulties, with the consequent benefit to the Spanish economy. According to Deloitte, for the future, companies are well positioned to take advantage of global opportunities as long as measures are taken in the domestic market and confidence and investment are restored.

To the impacts already known as a result of the Energy Reform (wind energy has been the hardest hit sector as evidenced by the paralysis of the domestic market, a 23% fall in average revenues in the first two years of implementation, debt service, the impossibility of recovering the revenue that the system promises to achieve reasonable profitability, permanent loss of value of assets …), the report adds a few more. To begin with, average employment was reduced by 11,521 workers between the four-year period analyzed (2012-2015) and the previous one. In total, 4,651 wind jobs were destroyed in the last four years, a figure that exceeds the total employment of the coal sector and that must be added to the 14,319 lost from 2008 to the end of 2011. On the positive side, the Spanish companies have created 96,431 wind jobs in the world.

In terms of contribution to GDP, it has also fallen by 2.4 billion euros in four years as a result of the lower income of the sector, which after the Reform are subject to strong volatility because they are intrinsically linked to the evolution of the price of the market. In 2015, wind energy accounted for 0.25% of GDP.

However, the report contains further figures showing how the sector has been able to reinvent itself in the face of domestic market difficulties. «Exports have strengthened, as the wind turbine and its components are increasingly demanded products worldwide and Spanish companies have been able to take advantage of it. In fact, the industry has continued to reduce costs and become more competitive» it says. Exports in the last four years added up to 11 billion – in the last two years, Spanish factories exported 100% of their production due to the paralysis of the domestic market – and Spain is the fourth exporter of wind turbines in the world. This impetus has led to a halt in the decline in employment from manufacturers, with 282 new jobs. As for the cost of energy (LCOE), wind energy is, along with hydraulics, «the technology with the most competitive costs when it comes to undertaking new facilities». Each time the installed capacity doubles, the generation cost is reduced by 12%.

In addition, during the analyzed period the emission of 106 million tons of CO2, valued more than 657 million euros, was avoided. And imports of 40 million tonnes of oil equivalent worth 9 billion were avoided.

Another important section of the report refers to the tax burden borne by the sector. According to Deloitte, taxes exceed the operating result. The introduction of a 7% tax on the generation of electricity in the period analyzed, summed to the wind energy rates established by the autonomous communities, considerably penalizes the profitability of the wind generation business. Only the 7% tax alone exceeds the heading for the personnel costs of the sector.

Regarding the future, Deloitte points out that «the Spanish wind energy sector is well placed to take advantage of the opportunities that are presented at a global level as long as there are regulatory changes that eliminate legal uncertainty, the domestic market will be reactivated in order to comply with the international commitments and set medium and long-term internal targets ambitious enough to give investors visibility».

The firm draws two possible scenarios, of which the most beneficial to Spain in economic terms would be to reach 40,000 MW of wind energy in 2030. According to the report, if this scenario is fulfilled, industrial activity would be reactivated and 10,000 jobs would be created; the competitive position of Spanish companies would be improved (economies of scale, technological leadership, qualified professionals, etc.), which would increase exports even further; And Spanish energy independence would improve by reducing imports of fossil fuels in larger amounts.

The necessary measures, in the hands of the regulator, so that the wind can prolong its development in the country are, according to Deloitte:

€$ Ensure the existence of a favorable, stable and predictable long-term regulatory framework that gives legal security to investments. This requires removing elements of uncertainty, such as that the reasonable profitability of the projects can be modified or the limits to the expected market price path, «which prevent companies from recovering the revenues that the system itself undertakes to reinstate».

€$ Introduce schemes (or improve existing ones) that reactivate the domestic market with the aim of boosting industrial activity. For example, a well-designed auction system that guarantees the execution of projects or rules that encourage the repowering and lengthening of the life of the facilities.

€$ Establish mechanisms that put into value the positive externalities that are derived from renewable energy and wind power instalóations in particular, such as reducing the country’s energy dependence and the pollution produced by electricity generation. In particular, the scheme to be established could be linked to the current European scheme for emissions trading and guarantees of origin.

€$ Introduce new contracting mechanisms in the wholesale electricity market, taking into account that the penetration of wind energy depresses the wholesale market price, which is known as the cannibal effect (for example, promoting long-term contracts such as the US PPAs).

«If these conditions are met, the wind sector will be on the way to overcome the impasse it has been in for some years,» the report concludes.

José López Tafall, Vice-President of the Spanish Wind Energy Association (AEE), says that it is impossible for Spain to join the Energy Transition that is lived in the world if it does not solve the regulatory situation. «We are about to close the first regulatory half-period of the Energy Reform. If in the first period of application of the regulation the sector has 630 million less income than expected to reach the reasonable profitability that promises the law, why are companies going to investá We must give guarantees to investors if we want the wind energy sector to have a future in Spain. «

To see the full report, click here (only in Spanish version).

Note: All figures are shown in constant euros in 2015 except for the savings for the electricity system, which is in nominal euros.